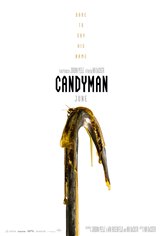 This film is a "spiritual sequel" to the 1992 horror film Candyman. Anthony McCoy (Yahya Abdul-Mateen II) is all grown up — in the original film, he was the infant who was stolen by Candyman.

The urban legend is that if you say Candyman's name five times while looking in the mirror, he appears in the reflection and kills you. When a group of girls are slayed after saying his name five times, Anthony goes on the hunt for Candyman, taking photos around his new neighborhood. Soon, he becomes obsessed with the legend.