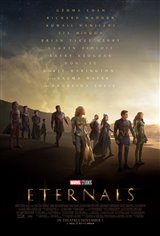 It's been five years since the Avengers undid Thanos' efforts to erase half of the lives in the universe, which created enough energy to start the Emergence. Just seven days before it begins, Ajak (Selma Hayek) looks to assemble the Eternals, a race of immortal beings who were created millions of years ago from alien experiments on ancient humans.

While still physically resembling regular people, they gained powerful abilities, like super strength, flight, teleportation, mind control, shape-shifting and energy projection. Since they've existed throughout history, many of the Eternals have lived among humans at times, scattered across the Earth.

She begins with Ikaris (Richard Madden). Although their role as protectors is questioned for their lack of participation in the conflicts that have occurred on the planet, Sersi (Gemma Chan) explains they were restricted to only interfering if Deviants, another race of super-humans that were more destructive and deformed, were involved. But now with Deviants rising for the Emergence, the Eternals must band together to prevent the end of the world.