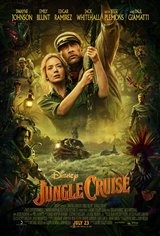 Based on Disneyland's popular theme park ride in which a small riverboat, equipped with a hilarious tour guide, takes a group of travelers through a jungle filled with dangerous animals and reptiles.