Kingdom of the Spiders 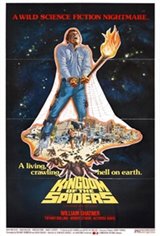 In Kingdom of the Spiders a swarm of huge tarantulas, enraged by the misuse of pesticides, try to take over their part of the world. Dr. Robert Hansen (William Shatner), a local Arizona veterinarian joins forces with entomologist Diane Ashley (Tiffany Bolling) to keep the spider population under control.

Woody Strode and Altovise Davis also appear as the owners of a neighboring ranch.

Unstylishly directed by John Cardos and produced with a sense of humor by Arachnid Productions, -- and despite bad dialogue, wooden acting and poor special effects -- Kingdom of the Spiders has become a cult classic and favorite of several generations of giant insect horror film buffs.