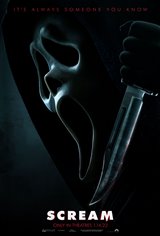 It has been twenty-five years since the small town of Woodsboro witnessed the initial killing spree brought on by Ghostface. After experiencing the terrors of multiple Ghostface's over the years, Woodsboro has a new killer taking on the mantle of the prolific murderer yet again.

Following three brutal attacks, Dewey Riley (David Arquette) suspects the incidents are connected to Ghostface. Feeling like something is different about the new killer this time around, Dewey contacts Sidney Prescott (Neve Campbell) for her help. She's more than ready to lend a helping hand, as they learn that their new killer is targeting a group of teens who are related to the original killers who donned the mask. Having survived the nightmares of multiple Ghostfaces, Sidney and Dewey do their best to educate and help the teens survive against their new killer.

With the recent events being connected to their past, Dewey, Sidney, and even Gale Weathers (Courtney Cox) prepare themselves to come face to face with Ghostface yet again and finally put a stop to the killings.