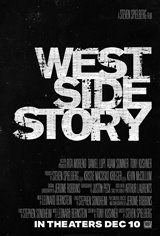 This new version of the musical explores forbidden love and the rivalry between the Jets and the Sharks, two teenage street gangs of different ethnic backgrounds.

When Tony (Ansel Elgort) falls in love with Maria (Rachel Zegler), it causes a strain within and between the two gangs.

Based on the book by Arthur Laurents from the 1957 Broadway musical, with music by Leonard Bernstein and Stephen Sondheim.