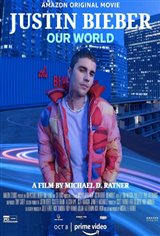 A small camera crew follows Justin Bieber through rehearsals, construction of a massive set and painstaking planning for live streaming his concert on the roof of the legendary Beverly Hilton on New Year’s Eve 2020 to millions. The concert is supplemented by footage shot by Bieber and his wife Hailey, bringing the audience into their home and daily routine.

But before the 240 invited guests can line the balconies of the hotel suites overlooking the stage, an array of challenges threatens to derail the ambitious undertaking, including strict Covid-19 protocols, a rare Los Angeles thunderstorm and a last-minute rush by fans to log into the livestream. Finally Bieber, backed by his dancers, band and an army of stagehands, delivers an electrifying performance amid a spectacular array of lights, lasers and pyrotechnic effects. From the wistful "Boyfriend" to an emotional "Holy," dedicated to Hailey, the artist’s often autobiographical songs have the concertgoers singing and dancing along with him.