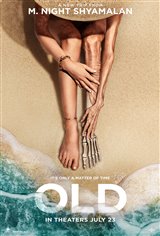 A family on a tropical holiday decides to spend a few hours at a secluded and idyllic beach decorated by natural rock pools, a sandy shore, and encircled by green cliffs. But after being there for a short time, they notice that their children are aging rapidly, growing into adults in the span of mere hours. However, it is not just the children. After discovering the dead body of a woman floating in the water, it seems as though the beach is causing everybody to age so rapidly that their lives are reduced to a single day. What’s more is that there is no way to leave, so the beachgoers must uncover the dark secret behind the secluded utopia.

Based on the graphic novel Sandcastle by Pierre Oscar Levy.