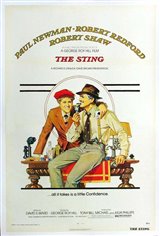 When small-time con man Johnny Hooker (Robert Redford) and his partner, Luther (Robert Earl Jones), unwittingly con a numbers runner courier, they find themselves in danger from mobster Doyle Lonigan (Robert Shaw). When Hooker finds out that Lonigan's after them, he goes to warn Luther, but arrives too late. So Hooker teams up with Henry Gondorf (Paul Newman), a friend of Luther's. A con man himself, Gondorf sets an elaborate plan in motion to get back at Lonigan.